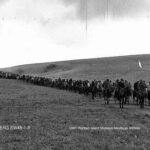 by Jana Roth
“…This revolutionary movement called Congo Movement or iKongo opposed the white nationalist government by incorporating approaches of witchcraft and sorcery to create a separate nation and fight against the apartheid state. The fact that very little published work without a systematic study of the Mpondo resistance exists, is an example of resistance by the marginalized that remains widely hidden. In this context, urban anti-apartheid struggles like the Sharpeville and Langa protests are well remembered, yet rural resistances like the Mpondoland revolts remain largely absent in historical narratives (Kepe & Ntsebeza 2011: 3ff.). This points to different aspects of silence revolving around the memory of these revolts, especially in contemporary discourses. In the case of iKongo, it is relevant to study the silences around womxn and around witchcrafts, since both remain subjects of silence and prejudice throughout history…”