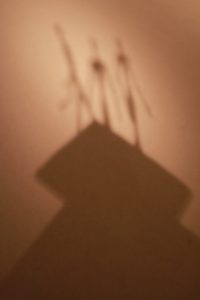 This is a theater play in which Chinua Achebe confronts Joseph Conrad with all the racist contents in Conrad’s novel on the Congo. The research preceding the writing of this play produced 4 main characters; one is the author Joseph Conrad, who will find himself trying to explain his attitude to colonialism which led to the writing of “Heart of Darkness”. He will be supported by the choir of critics, who try to speak in his favour and defend him against the accuse of racism. On the other side we have Chinua Achebe, Nigerian author and as well the person, who started the debate of racism in Heart of Darkness with his 1975 essay “An image of Africa”. He will be supported by the leading figure of the Reader, which is very positively portrayed as a critical and reflected person who leads the discussion, asks questions and contributes impressions of reading as well as academic knowledge. The dialogues are featuring original quotes from literature essays and interviews.